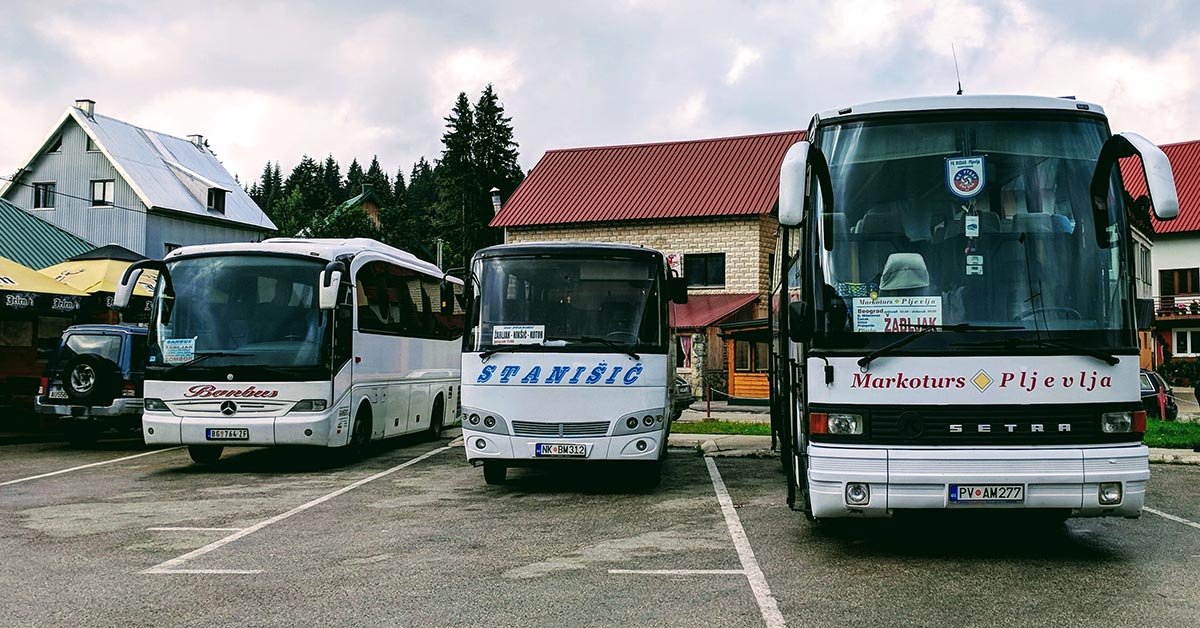 How to Travel the Balkans by Bus Like a Boss

So you’re going to the Balkans, and chances are you want to get around cheaply and efficiently. While much of Europe is easy to get around by train, in the Balkans the bus is king. If you don’t have a car, buses are one of the most efficient modes of transport. While there are still trains on some major routes, such as Split to Zagreb in Croatia, buses come more regularly.

When I told my Mum I was catching an overnight bus from Serbia, she was a little worried. After all, The Night Bus sounds like a good horror film title. But having done the trip myself, I can say buses in the Balkans are clean and safe, although you’ll probably get to hear some Europop on the way. Most of the people on my buses were families, scouts or tourists hitting up the coast. There is a driver and conductor, who will check your tickets before you board and manage the luggage going into the bus. And yes, they’re air conditioned, which in summer is perfect!

The buses were busy in summer and you might struggle to get a seat. If you’re travelling solo, I’d recommend just taking cabin baggage, so you can be first on the bus. If you’re a group of two or more people, designate one person to be the luggage handler, and the other to get seats on the bus. Otherwise you’ll end up wedged between seats or standing up for a four-hour trip.

And if you’re travelling along the coast, make sure you get a seat on the side of the bus that faces the water! There are some amazing views in the Balkans and you don’t want to miss them.

At the bus terminal

Most buses depart from the local bus terminal, which usually has a smattering of food and snack shops, ATMs and waiting areas. In Belgrade this was a proper bus terminal with multiple departure areas, similarly in Podgorica. In Žabljak, this was more like a car park with a ticket office.

The buses will have a sign in the window to show the destinations. Make sure you check your bus’s destination before getting on. Don’t be like me and get on the bus to Sarajevo instead of Split! Luckily the bus driver let us off about 10kms out of town, but we still had to get a taxi to drive us back so we could get on the next bus.

What to Bring on a Balkans Bus Trip

If you’re doing an overnight bus trip, I’d recommend bringing the same gear you’d take on a plane flight. Trust me, when the driver didn’t turn the radio or the lights off on the overnight bus, I wish I’d brought my eye mask and ear plugs.

If you have checked luggage like a backpack or suitcase, DO NOT forget the euro coins. They will not let your luggage on without paying at least 1 euro for baggage. The conductor will put a sticker on your bag and place it under the bus. I was caught out late at night at Belgrade train station and had to withdraw money from the ATM when I’d cleared out my wallet of coins and Serbian currency.

Where to find the timetables for Balkan Buses

Timetables can be tricky as there are multiple private operators on the same route. But there are two websites I found helpful for finding bus departure times:

In Montenegro, most routes go through Podgorica, the capital. If you can’t find a direct route from town to town, try going to the capital then onwards. This was the case with my trip from Durmitor National Park to Kotor – there’s only one to two daily direct trips, but plenty of indirect trips through Podgorica.

How to buy tickets

The buses can be crowded in summer, so it’s important to buy your tickets in advance. This doesn’t mean you need to book them three months in advance, just head over to the bus depot a day or so before your trip to buy tickets. You can also get tickets on the day.

Tickets are reasonably priced – I estimated it was around $20 for each leg of my trip, which considering the distance is pretty great.

We found most ticket sellers spoke enough English to purchase tickets, but if all else fails, write down your destination and the time and hand it to the ticket seller. Some lines allow you to book online using the above mentioned timetable sites.

I loved my time in the Balkans and hope you have a great trip! If you have questions about travelling the Balkans by bus, ask away in the comments below.