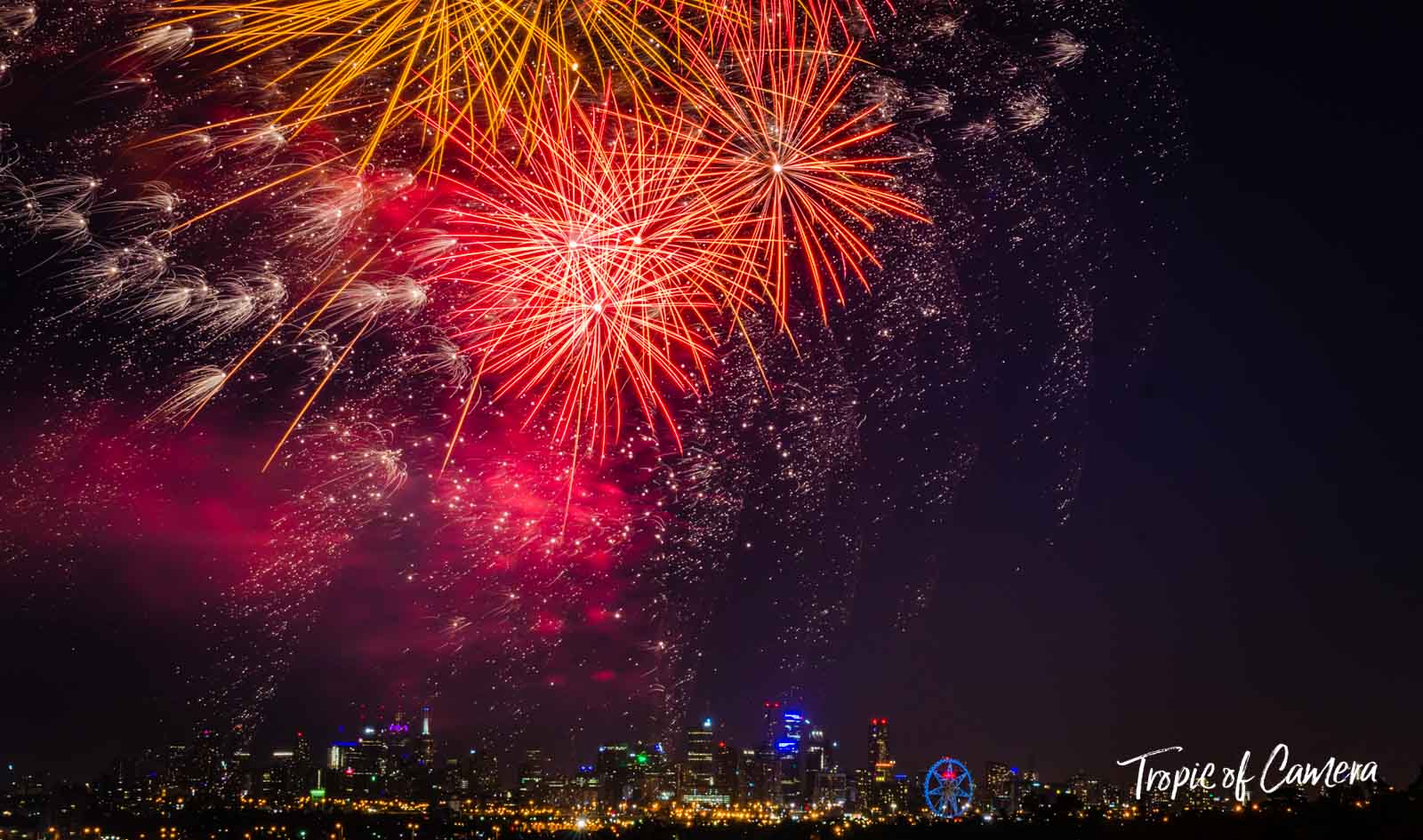 Over the new year I always love to take photos of fireworks. Nothing says celebration like a giant fireworks explosion! It was my first new year in Melbourne, so I sought out a great spot to take pictures in Footscray, watching both the 9:30pm fireworks in Footscray and the midnight fireworks over the city.

My friends have often asked me how to take photos of fireworks – often they turn out blurry or don’t catch the moment. The great thing is, you can take a good fireworks shot as long as you have a camera with manual controls and a stable base. Here are my best tips.

It goes without saying, but if you’re going to take photos at night, you need a stable tripod. With good vantage points you often get wind and exposed to the elements, so make sure the tripod will handle the elements without shaking.

2. Scout a location in advance and get there early

Depending on the popularity of the fireworks display (Think Sydney Harbour Fireworks vs local fireworks), you’ll need to pick a good location in advance, and often get there at least a few hours beforehand to secure a good position. Raised locations often provide the extra advantage in getting above people’s heads. Getting there earlier also means you can set up your equipment, do test shots and set the focus before the fireworks begin.

3. Be aware of where the fireworks are coming from

In my recent photographs of the Footscray fireworks, I focussed on the cityscape, without realising the fireworks would be a lot closer than the city, because they were just down the hill from where I was standing! When they started going off, the fireworks were cropped out of the photo, so I quickly adjusted to a wider angle and refocussed. Lesson learned!

4. Use manual focus and set it before the fireworks begin

Once the fireworks get started, you won’t have time to keep refocusing the camera. Camera autofocus can take longer at night, and it’s better to set it properly before the fireworks start. If you’re taking photos of a city panorama, make sure it’s in focus before you take those great shots. What I often do is use manual focus to chose my area of focus, then switch onto manual and take a couple of test shots to check. Once I’m happy with that, I don’t need to change it again.

5. Use a remote or delayed shutter

Ideally a remote is the best option, but if you don’t have a remote, use a delayed shutter setting on your camera for 1-2 seconds. This will reduce camera shake, plus you can stay sitting in your chair while your camera does all the work! 🙂

6. Use a long shutter speed

A long shutter speed will help you capture the trails of the fireworks. I set my camera on a long shutter speed between 8-15 seconds. However I’ve experimented in other situations and done a 30 second exposure of fireworks, which can have some interesting effects of capturing patterns. Fireworks photos are great for experimenting and trying new techniques – if if doesn’t work, at least you’ve learned something!

7. Observe what people are doing around the fireworks In between fireworks is a great way to capture spontaneous shots from the event. At the New Year’s celebrations in Melbourne, a lot of people were waving light batons and sparklers, and I captured a few great light shots which weren’t planned. Don’t stay tied to your tripod!

What’s your best tip for how to take photos of fireworks? Have your say in the comments below.

Comments
How to photograph Lunar New Year – Tropic of Camera

[…] If you know there will be fireworks at a certain time, pick a good location ahead of time. It’s helpful to have a buddy at these events so you can mind the spot, as you might need to wait a little while before the show starts. If you’re keen on photographing fireworks, check out my full article on how to photograph fireworks here. […]