Colour, vibrant action and excitement collide at the great international festivals, providing many opportunities for photographers. Here are my top 10 festivals for travel photographers. I’ve either been there myself, or want to go!

To me, Holi is the ultimate festival for photographers. No travel photography portfolio is complete without Holi pictures. While traditionally a Hindu festival, the celebrations spread right across India. Photos from the festival of colours are often winners in photo competitions, simply for their incredible mix of colour and people. If you do go, check out my Holi Photography Guide here. 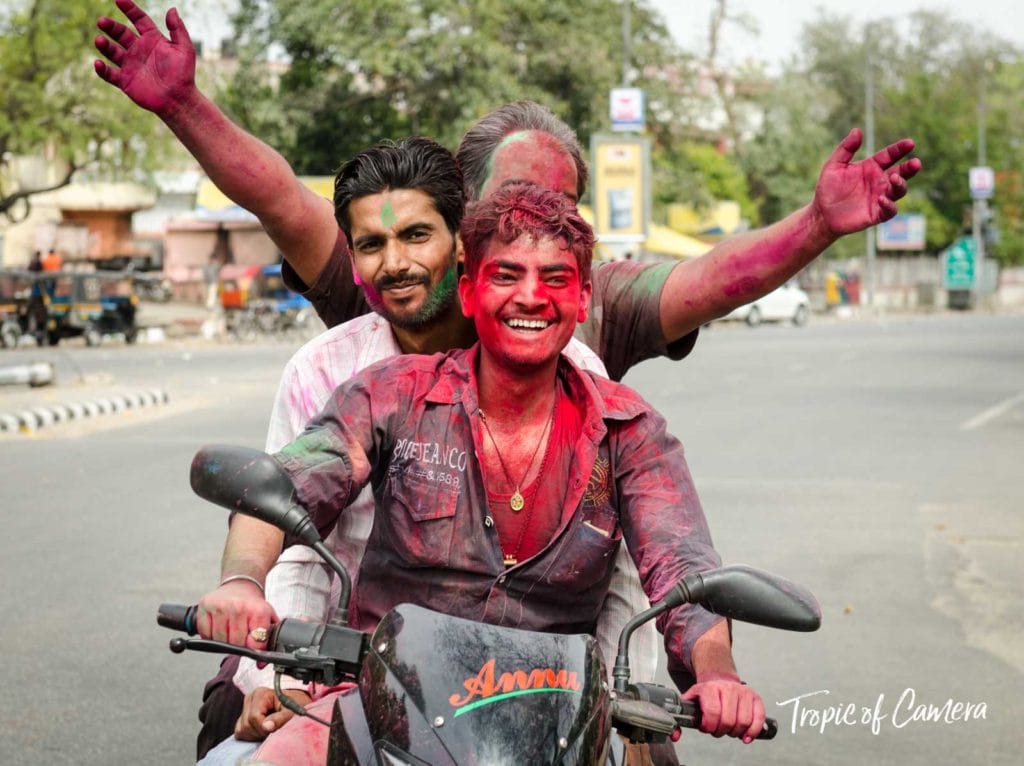 In the desert, a great rolling ship emerges from the dust storm. Artists parade in incredible costumes on an alien landscape. Fire breathing machines drive through the dark night. If that doesn’t convince you, check out the Rolling Stone Burning Man galleries, including this incredible shot by Scott London.

Women in bikinis have always been popular with photographers. Add to that some glitter, rhinestones and giant feathers, with a background of samba music and you have only a hint of the intensity of the Rio Carnival. But pack your telephoto – unless you’ve got a media pass, you’ll be watching from a distance! One of the most beautiful festivals I have attended was the Loy Krathong Festival, in Thailand. Thousands of people light lanterns and float them into the air to make wishes. Celebrations are held across Thailand, but Sukhothai is the heart of the festival. To find out more, read my article about Loy Krathong on Matador Notebook here.

When: Depends on the moon cycle, usually November

Throwing tomatoes at strangers sounds like a pretty fun time. As does lying in a river of tomato sauce. Held in the old city of Bunol, visitors throw thousands of tomatoes at each other each year in the world’s biggest food fight. Make sure your camera is waterproof.

Nothing says picturesque like a snow coated European Christmas market. The village feel, the glowing fairy lights and local produce mix together to create a fairy tale atmosphere. Most major cities in Europe hold a Christmas fair, but Germany and France are the most popular. “If anyone’s going to get killed in New Orleans, it’s on Mardi Gras or Halloween.” That was the advice I got from my accommodation manager. Bourbon Street is dark, drunk and the home of vampires according to popular fiction. But the festival itself is one of the wildest Halloween parties in America. Just like Cinderella, make sure you go home before midnight before things get really nasty.

Photos from the Eagle Festival look like something out of a medieval book. Mongolian riders hold giant eagles on their arms and ride through the sparse landscape. Hunters compete in a series of tests while wearing traditional costumes, making for some spectacular action shots. A universal festival, New Years is celebrated in different ways across the world, whether it’s the excitement of New York city, the ringing of the temple bells in Japan or the Sydney Harbour Bridge exploding in a waterfall of colour. What’s great about New Years, is that you can celebrate it locally or overseas, making it an inexpensive travel photography opportunity in your own neighborhood.

Just after western new year, are traditional Asian celebrations, including lanterns, beautiful costumes and food. In China and Chinatowns across the world, dragon dancers stomp through the streets, while themed lanterns are set up on rivers and in processions. It’s a great time to visit temples and view traditional rituals as well.

What is your favourite festival for travel photography? I’d love to hear of some great African festivals, as I’ve never been there! If you have a gallery, share a link below.

Awesome write up! You did well including the Eagle Festival. 😉 A cool one in Africa is the Cure Salee Festival in Niger. I want to go someday. Africa is definitely next on my travel list once I finish Asia.

How to Use an Ultra Wide Angle Lens

How to Backup Your Files While Travelling