Beating the heat at the Australian Open

So the last week was one of the hottest of my life. In case you were in Antarctica, Melbourne’s been suffering over 40C temperatures every day. Up to 111F for my American friends! And coincidentally it’s also been the week of the Australian Open, one of Melbourne’s premier sporting events. The Australian Open is one of the four grand slam competitions, along with the French Open, Wimbledon and the US Open.

I must admit, I’m not a huge tennis fan. When my friend Julia asked me to go, I immediately thought of my disastrous attempt at a pro-tennis career involving my 3rd grade tennis skills being so bad the instructor wanted to put me in with the kindergarten kids. And whenever I’ve tried to play tennis since, my lack of hand-eye coordination has seen balls sprinting past my face, the tennis racquet in the opposite direction.

But in the interests of being in a new city, new experiences, new year etc etc, I agreed to go. Why not?

We went on Wednesday night, which was thankfully one of the cooler nights at the tennis. A breeze blew off the putrid Yarra river, dotting my nostrils with the scent of effluent. From Flinders Street Station, I wandered through Birrarung Marr, the bells ringing Waltzing Matilda in the background while I tried to step like John Wayne to avoid the severe heat chafing between my legs. The result was a sweaty woman in a 70s maxi-dress stepping towards the Rod Laver Arena as if she were walking into a gunfight. 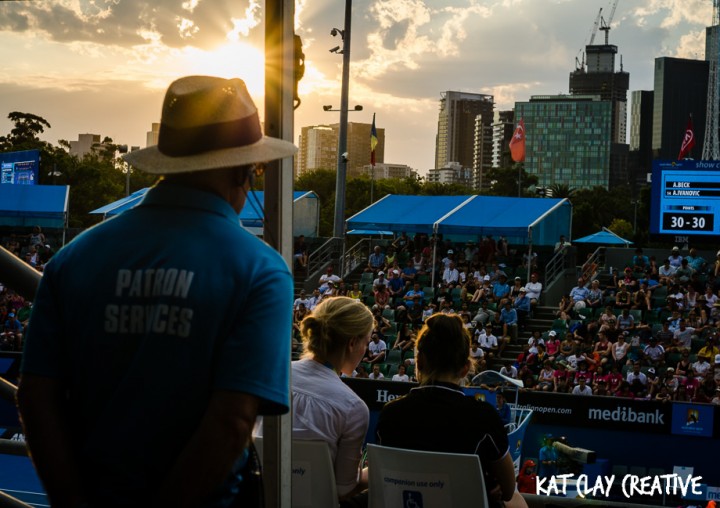 Once at the arena, I parked it out the front on the grass, enjoying my book while my friend came. It was a nice place to relax, watching the world go by as the breeze picked up. When Julia arrived, we went into the stadium; we’d bought general admission after 5pm tickets which allowed us to go into the outside show courts. But first things first: FOOD.

Food pretty much rules my life. I’ve been described as a hobbit; I like to take my dinners and breakfasts and elevensies. We popped into the nearest food place we could see. The exceptionally average hot dog and skewers tied us over until we could find the ice-cream stall, a much needed necessity on a hot day. Ice-cream is pretty much non-negotiable on summer days in Australia, it takes over as one of the five food groups.

As I’d never been to the tennis before, I didn’t know how the stadiums worked. Much like the theatre, you can’t go in while they’re playing, you have to wait outside until there’s a break. We hit up the first game we could find, Stan the Man vs Mr Falla. Swiss vs Columbian. The atmosphere was electric with enthusiastic Columbians and a couple of rowdy pirates. In typical Oz fashion, the Australian Open isn’t a stuffy white collared, polo shirt wearing crowd. Nope, there’s your Aussie flags, blokes wearing thongs and having a beer, face paint and odd costume or two. Women dressed in teams with headbands and mullets. That kind of thing. 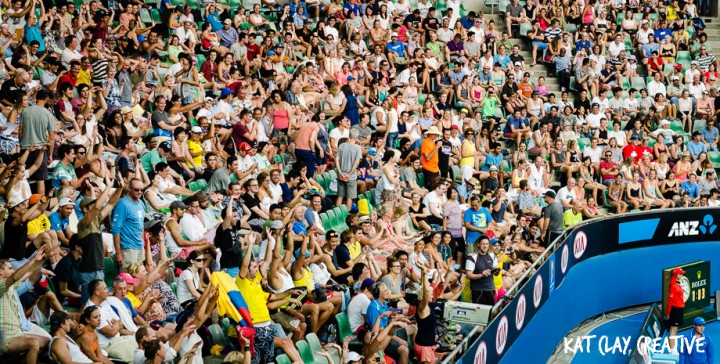 The thing about Australia is that we get into our sport. We love to cheer for the underdog. We love to cheer. Despite not being a particularly sporty person, I love the atmosphere. It’s so funny how people go wild, then the moment the players are about to serve, silence penetrates the stadium.

Despite making a heroic effort, Mr Falla succumbed to Stan from Switzerland. He gave it a good shot though, especially in the hot weather. We left before the final set, what with having to go to work the next day, but I was in a great mood. Although you can watch it on the TV, there’s nothing like the atmosphere of the Australian Open in person. Lesson to be learned: challenge yourself to do something outside your comfort zone and you might be pleasantly surprised!

Road Trip from Sydney to Melbourne on the Cheap