Kat: Having lived in Ulsan for just over three months now it was weird that we’d never travelled to Busan before. Busan is Korea’s second largest city, right on the coast, and a big shipping town. It’s only 40 minutes by bus from our place, 20 on the train. But friends of ours were having a birthday party and I was flying out from Busan airport the next day to Singapore, so it was a good excuse to go down an explore the city.

We arrived early on the Saturday and checked into our hostel. I think we’re both over dorm rooms in hostels. Not that there was anything wrong with this one, it’s just there’s other people in there and other people always have different ideas about what is acceptable in communal living. At least this wasn’t as bad as being offered pot or the matchy-matchy German backpackers in San Francisco. But it was a big weekend for Busan and there was no private rooms at the inn due to an International Lions Conference.

Lions abounded (the community group not the animal), local musicians played outside for entertainment, including this punk rock band who were a little on the loud side. It’s funny how you can put chairs in front of a stage in Korea, play anything and old Koreans will come and watch regardless of what is being played. So while the punks were rockin’ out on stage, the fogies were patiently listening and tapping their fluoro sneakered feet. 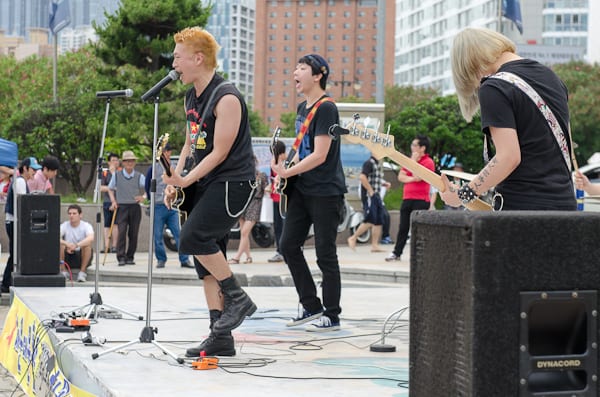 We checked out Haeundae Beach, the most popular beach in Busan. Koreans have a different idea about what constitutes a beach compared to Australians. You’re not allowed to swim past waist level for fear of drowning, and there are jetskis and life savers at the ready in case you go in up to your neck (heaven forbid!). Most people don’t swim anyway, content to lay on the beach underneath enormous hired umbrellas not tanning (because Koreans love the lighter shade of pale). And each section of the beach is owned by a different company, so there is very little beach that is not ordered into rigourous sectioning. Whatever happened to grabbing your beach towel and staking a spot? 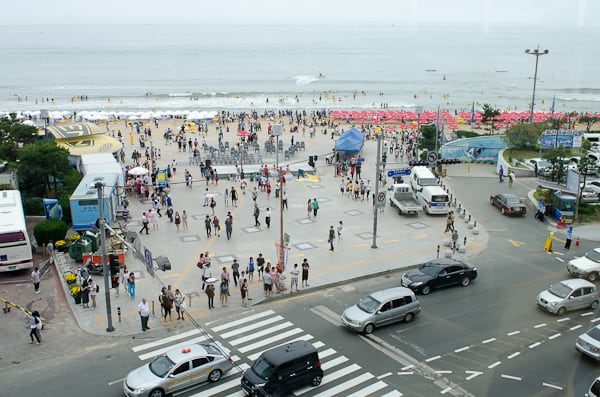 We weren’t in the mood for monitored swimming, so instead we searched for a cafe near the beach. Amidst the chains of A Twosome Place and Starbucks, we found an incredible garden cafe called Pansy on the 5th floor of the Twosome Place building. A haven of tranquility and calm might sound like a cliche, but with the light decor, flowered tables and peaceful piano music it was truly a nice place to spend a couple of hours reading a book. I ordered a liqueur steamed chicken salad which was enormous and incredibly delicious. You can also take high tea at the cafe, which I will surely return for. 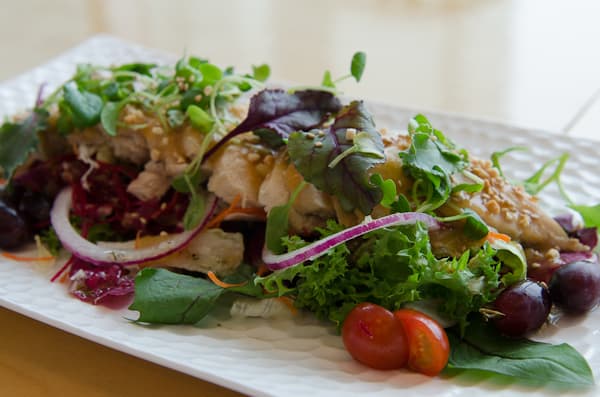 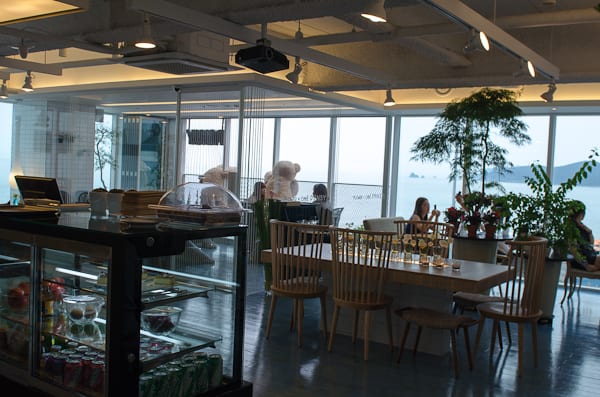 Justin: Busan is a lot more beachy, touristy and refereshing than Ulsan. We went down to Busan to get Kat to the airport for her trip to Singapore on the Sunday and also to catch with with Alex, Annie and Caroline, three lovely people we met on a very memorable trip to World Expo at Yeosu. Alex and Annie are both South African and Caroine is from the United States. To our surprise there are not many Australians living as ex-pats in South Korea, there are however plentiful amounts of Americans, Canadians and Pommies.

We had soju on Gwangalli beach; Soju is the South Korean spirit of choice. It’s like a sweet Vodka and it is very reasonably priced. You see it and can buy it in so many places. When walking down the beach to locate dinner, and more pressingly for me a toilet, we encountered a stage with Korean drumming and some theatrics. This is what is so awesome about Korea – you get hit with unexpected cultural amazement out of nowhere. Like when we were at World Expo in Yeosu, and out of nowhere this electro circus act just materialised. The unexpected blast of cultural feast or late at night a swaggering errant Korean man lunging your way – expect the unexpected in Korea, and expect nothing less. 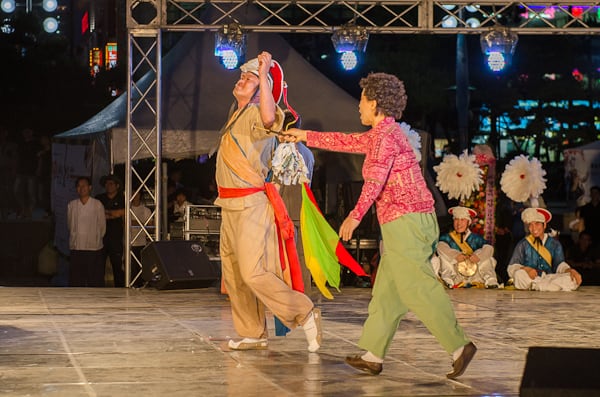 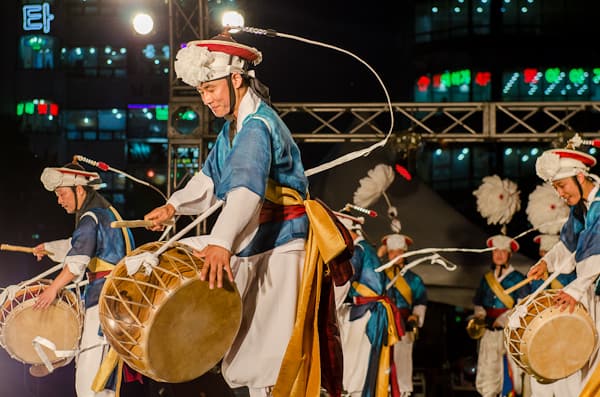 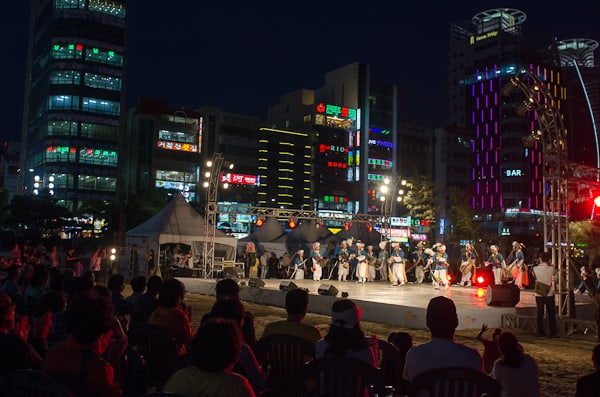 We eventually found a place to have dinner – a sausage platter and some Long Island Ice Teas (or some strange Korean take on it as it didn’t taste anything like a classic LIIT). The pub was incredibly dark and like so many clubs and bars in South Korea. Maybe that’s why they are so addicted to neon and bright colours… and the fact you can hit by a car in almost any and every circumstance when walking on a near a road.

The plan was to head to a theme park around ten, unfortunately Kat and I needed to scoot back to our hostel to get some sleep before her trip to Singapore the next day. It turned out the theme park was closed anyway. A great night with great people – I really love meeting ex-pats in Korea. A final point is that Marcus Brody aka me (who can get lost in his own museum) successfully made it back to Ulsan KTX from Busan without Kat’s assistance – this trip is teaching me a lot about basic navigational skills – and also my need to fast track my knowledge of Hangul. 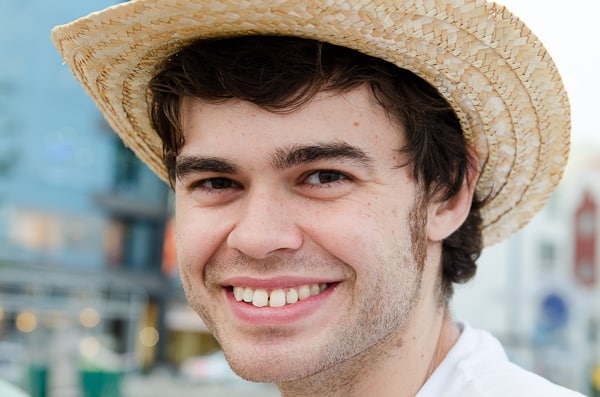