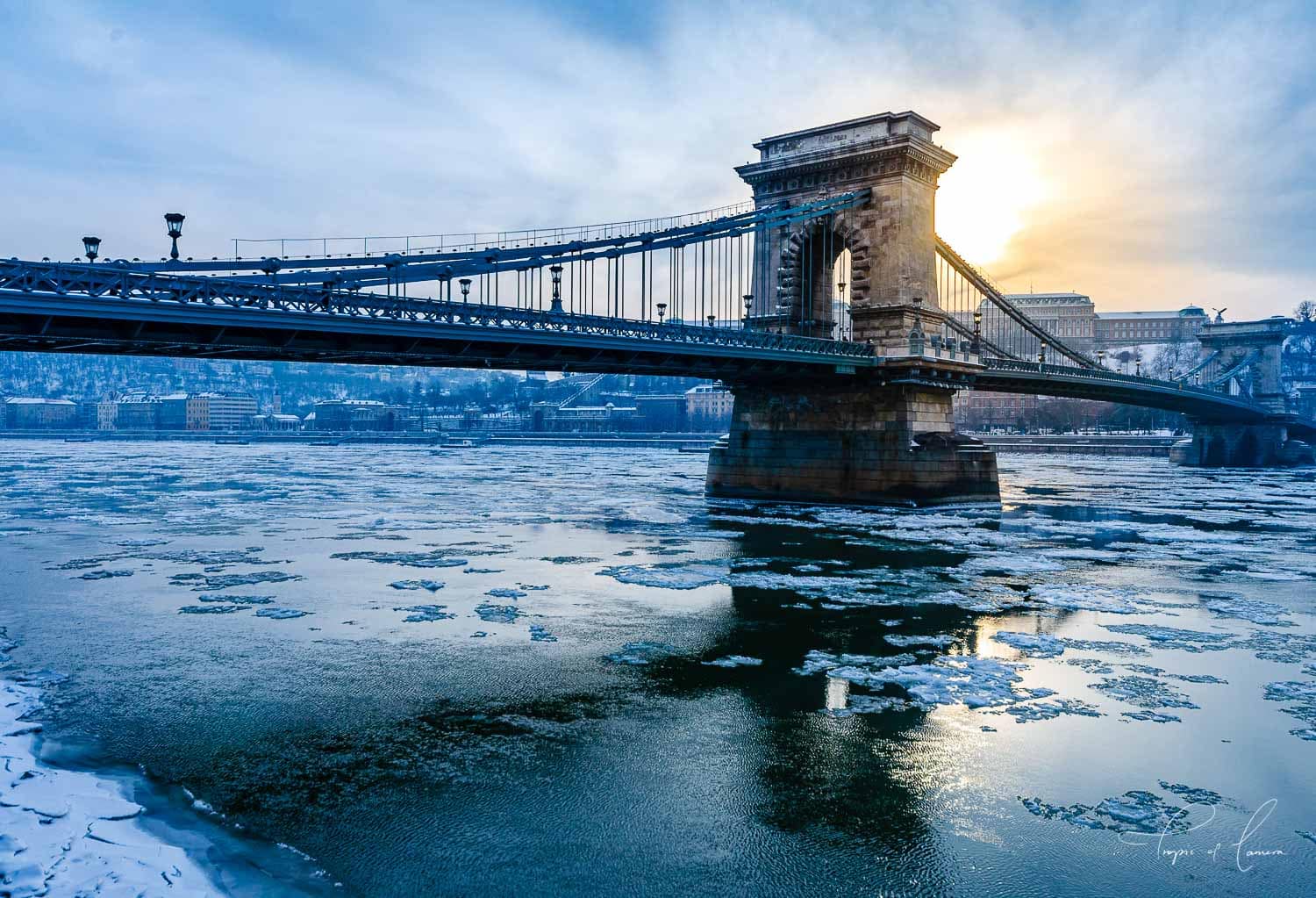 Champagne lifestyle on a Budapest budget

Kat: In the past week I’ve dined at the Hilton, been pampered at a thermal spa and seen George Clooney (albeit in a film, but I’ll take what I can get). You may wonder how can we afford this luxurious lifestyle, but Eastern Europe is a budget tourist playground. Tea and cake at the Hilton: $5. George Clooney: $5. He’s rather cheap.

In fact I’ve discovered that George Clooney is the universal language. Can’t pronounce the name of the film in Hungarian? Staff can’t comprehend “The Descendants” in English? One mention of ol’ “George” and a world of understanding opens up. He really should be employed by the United Nations. Oh hang on, he is.

While Justin’s been resting at the apartment down with a bad chest infection, I’ve been wandering the city looking at the various buildings and bridges. I walked down to the chain bridge at sunset, Budapest’s most beautiful bridge. The most incredible thing was the icebergs in the Danube, which float down the river when it gets warm enough for the ice to crack. Then the temperature drops and the river freezes over again. Looking on the shore, the ice shards are as thick as a finger and sharp as glass.

The weather’s been some of the coldest in the history of Hungary, so some days are better spent indoors watching the West Wing and reading books. The onset of Valentine’s Day has begun a new tradition – reading Jane Austen before bed. I must admit Justin has been a trooper when it comes to the five Miss Bennetts but I suspect he’s actually enjoying it.

Now for the smoochy woochy kissy cuddly stuff. For Valentine’s Day we went to the Szechenyi Baths in Budapest. The town is well-known for the healing volcanic waters that lie below the city. While the weather drops below 0C, the 38C waters are incredibly relaxing. While Justin lazed about in the ultra-hot bath, I waded in the warm pool with the wrinklies. And got my own 70 year-old George Clooney alike, complete with beer gut, budgie smugglers and wriggling eyebrows. Exiting the pool post-haste he came out to meet me and said something to me in Hungarian. “Sorry I don’t understand,” I said smiling as I moved past him and back to Justin as quick as I could!

After my encounter with “Eyebrows” we went and got a massage. My masseur turned up; seven feet tall, just as wide with a military hair cut. I was sure his name was Boris (if I asked his name, that is). But joy! After being lathered with vegetable oil I was relaxed as I could be.

Lunch at TGI Friday’s followed. My first steak in a month. And whatta steak. Perfectly cooked. It seems you can’t get beef at the supermarket in Budapest. Every time we think we buy steak it turns out to be pork. And more pork. We’ve had lots of pork on our forks this week. But Hungarians do have a notorious sweet tooth. You know from the supermarket; there’s one aisle for salami, one for pickles and two for chocolate. I’ve taken it upon myself to embrace my inner Hungarian and eat as much sugar as possible.

Next week you’ll hear from us in the Transylvania snow fields. Stay tuned, vampires. Kat

Justin: One of the pitfalls of living and traveling overseas is that sometimes when you get sick, you get REALLY sick.

I used to work in homeless services, one client in particular was particular susceptible to chest infections, it would seem his rough coughing was raucous and interminable, it caused him a lot of misery and strife. I know thoroughly know how he felt: miserable. For 5 weeks I’ve battled one of the worst sickness I have ever come down with. It started when we arrived in Salzburg on the overnight train from Rome. I thought it was a cold at first, then a strange flu but then it became a full-blown chest infection that really smashed me big time.

I pretty much stayed home for most of the past four weeks suffering what Kat dubs ‘man flu’: persistent whining, whingeing and throwing a selfish pity party for one. During this time I went on a course of antibiotics, two courses of cold and flu medications, lost about 10 kilos (down three belt notches!) and coughed and blew out enough phlegm to turn the Danube green. The symptoms were utter exhaustion, muscle fatigue, dizziness and non-stop coughing.

Good news is that I am on the mend, after a few emotional shattering false dawns the racing heart, congestion and non-stop coughing is appearing to abate for good. Hallelujah! I am deeply thankful to my uncle’s wife Cilu who took time out to take me to an excellent doctor in Budapest. The antibiotics definitely sent me in the right direction health wise.

I have also spent good time with my Uncle Ivan and Cilu, and Petra (my cousin) and Tom the past 3 weekends. Uncle Attila has been magnificent in showing us around Budapest and taking us to the respective houses. I’ve really enjoyed time soaking with my family, to be honest I think we’ve seen our fair share of museums, statues and all cultural points of interest to last a lifetime. What I really needed was good family social time and we got it in spades. Petra and Tom have a beautiful family with four children, they love playing board games together and happily we joined in. I normally avoid the fantasy genre like the plague, although my heart was really softened when it came to fantasy card games, they were just so damn addictive and fun.

Home cooking by Petra and Cilu was also first-rate, when you travel extensively sometimes your heart aches for homely meals especially when you are eating out a lot. And kudos to both for being exceptional and inviting chefs.

Attila, or ‘Attipapa’ as we affectionately know him, was in great form. He loves to take spontaneous photos and utilise the photos into calendar albums or our faces superimposed on a jib jab moving e-cards. He’s a proud grandfather and really loves spending time with his family. He’s also a lively and animated guide and in spite of what he says about his English being a little poor is well versed in communicating complex ideas and seems to grasp what we always are saying.

Ivan and Cilu have also been magnificent to us, and today they took us on special tour around Hungarian parliament today too, they had a friend who is a chief engineer there. The Hungarian parliament building constructed in the late 1800s is one of the premier parliament buildings in the world. Built in the neo-baroque and neo-gothic style, it is an exceptional building combining some of the very best of various architectural styles we picked up across Europe. We saw the royal crown worn by Hungary’s first King, St Stephen. The crown is heavily guarded and enclosed in a cabinet weighing roughly 700 kilograms. Our special guide obtained privileged access to the upper house, which in a strange way looked like an Opera dressing room, lots of large non-covered light bulbs and rich carpeting.

I love my Hungarian heritage the people are just so loving, inviting and warm, Hungarian blood runs deeply through me, I loved getting acquainted again with my heritage and culture. Ciao, Justin.

You guys are a blast to read…just found you from the MatadorU website, and I’m so glad I did! Gotta go update my RSS now…you monkeys have fun! Hope you’re feeling better, too 🙂

Right back at you – had a great laugh on your site too! We go on tours together and people think we’re the comedy duo.