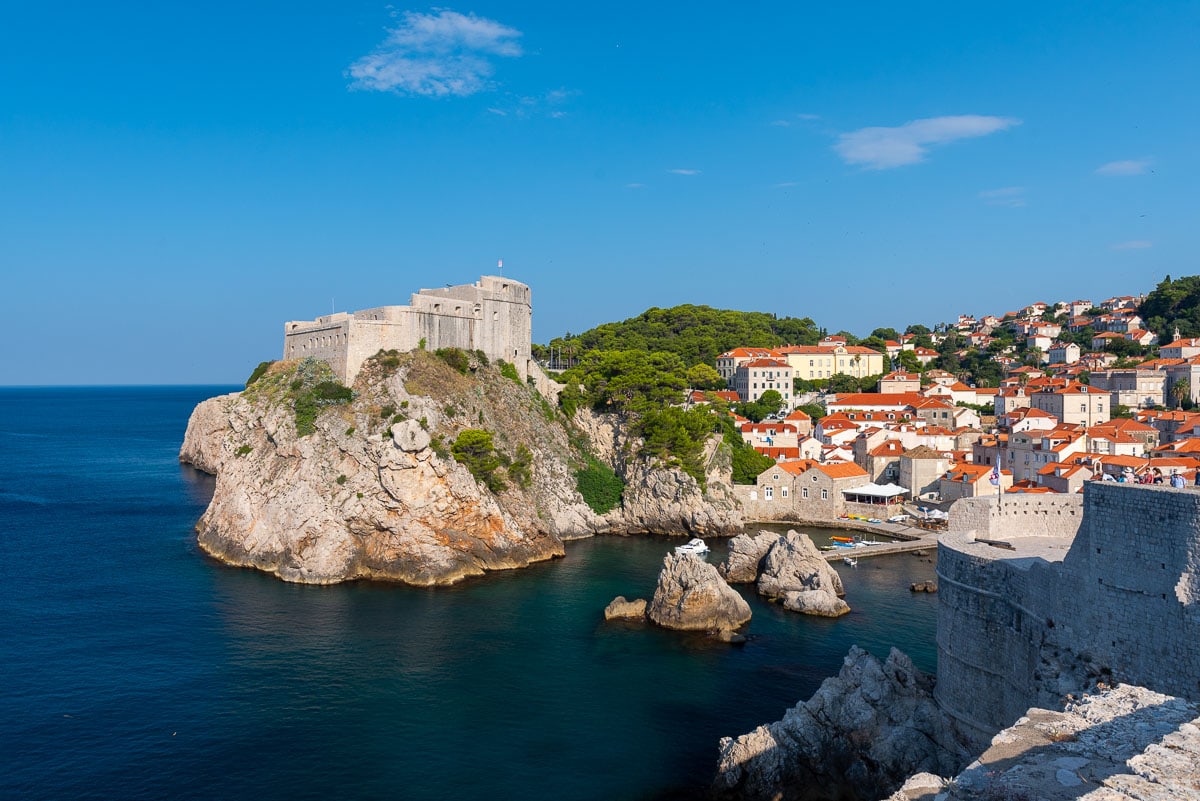 They say winter is coming, but the only hint of winter in Dubrovnik right now is the slogan plastered across numerous souvenir shops, all claiming to be THE official Game of Thrones shop. They’ve got shot glasses printed with witty quotes from Tyrion Lannister, notebooks emblazoned with the crest of your favourite houses, and even an Iron Throne to entice customers – buy one item, sit on the Iron Throne.

If only it had been that easy for Cersei Lannister, she might not have had to kill Ned Stark and drink so much red wine.

I’m in Dubrovnik to channel my inner Cersei on the first day of a two-day Game of Thrones tour, a tour so big it crosses the Narrow Sea. But in Croatia, you don’t need a flotilla of House Greyjoy ships, nor marry Westeros’ most eligible bachie, Euron Greyjoy, to get between Mereen and King’s Landing. You simply need a $20 bus ticket and a few hours to traverse the coastline between Dubrovnik and Split.

The city of Dubrovnik balances over the Adriatic Sea, the red-roofed houses ringed by a wall more familiar to viewers as King’s Landing. Beyond that, Blackwater Bay, and half a dozen cruise ships heading out to the islands. While season one was filmed in Malta, many Kings Landing scenes were shot in Dubrovnik between seasons two and four. Yes, Joffrey’s perverse death and that walk of shame all happened right here folks.

A diverse group of Game of Thrones fans gathers around the fountain outside the city walls of Dubrovnik. One tour guide is even dressed up in the 30C heat, complete with leggings, sword and vest. I’m slightly chuffed when the tour guide refers to me as a true fan, since I started watching the series the week it began. I don’t know what this means for the readers who have followed it since 1996.

We walk up the hill to Fort Lovrjenac, which looks over the old city and the aquamarine ocean. The fort was a key location for Game of Thrones, used as both the Red Keep and Fleabottom when Sansa escaped from Kings Landing. It’s quite astonishing how a turn of the camera and some spiffy set dressing can transform a location; any time you see foliage over a building in the show, it’s probably hiding some hint of modernity.

While there’s no Joffery Waz ‘Ere signs scrawled into the walls, the balcony where he watched the Hound’s duel is unmistakable. Our guide points across the water to a local park atop a cliff face. “See that palm tree? That’s where Joffrey died.” We’re all a little unusually excited at the prospect of his death.

On the opposite side, towards the old city, lies Lockrum Island, where Dany went to find her dragons at the House of the Undying. Below, Marcella’s beach where she leaves and returns from Dawn, has been overtaken by bright orange kayaks. And directly in front, a rotund fortification off the old city walls is where they defended Kings Landing against Stannis Baratheon in the Battle of Blackwater Bay.

Everywhere you look is a potential Game of Thrones location.

It’s like going to New Zealand, minus the hobbits.

Descending the stairs – for there are stairs everywhere in Dubrovnik – we stop at the pier where Joffrey drowned the bastards. It’s rather pleasant now, another kayak floating in water so clear you can see the boat’s shadow in the sand. Without a moment’s hesitation, I step in to pose as Sansa Stark watching the water in the wake of the battle. My husband refuses to pose as Shae.

Entering the walls of the old city, I filter through the crush of tourists walking between the gates. Brienne of Tarth passed these walls, as did Jaime Lannister, although there weren’t as many ice-creams and sports sandals involved. We’re led to the upper city, the start of the notorious walk of shame.

There’s nothing that screams Game of Thrones more than an angry nun ringing a bell, and it’s fitting our tour guide continues to play bell sounds on some phone app to set the mood. “Shame! Shame!” cries the crowd posing for photos on the steps.

I walk the paths that Cersei walked, although it’s not recommended to do this part naked: the sun is brutally reflective off the stones of Dubrovnik and I’d rather suspect you’d get burnt.

The ultimate tour leaves the less-true fans behind and continues by bus to Trsteno Gardens. Throughout this all, I’m channelling every badass woman in Game of Thrones – Cersei, Sansa, Arya, Brienne and of course, Lady Olenna Tyrell. And nothing is more badass than taking lemon tea cakes with the Queen of Thorns in her garden gazebo.

Trsteno Gardens lies only twenty minutes’ drive from Dubrovnik, but it’s a relief from the busy city. Purple flowers hang from arches, daisies poke out from garden beds, all along the gorgeous coastline with few tourists in sight. Not only is Trsteno home to Lady Tyrell’s well-known gazebo, the early scenes from Joffrey’s wedding were shot here, including Sansa’s pursuit through the garden.

While our walk through Trsteno brings the Dubrovnik tour to an end, two days later I’m in Split seeking out more Game of Thrones locations. No “true fan” would simply tour Dubrovnik, when Mereen is only three hours away. Like Dubrovnik, Split is an old walled city, but with a twist – it’s the entirety of Diocletian’s Palace turned into living spaces, restaurants and shops. While you might go to Split looking for the Palace, you’re actually standing in it. The palace was built in 305 AD for the Emperor Diocletian, and gives some idea of the huge scope of Roman architecture.

This palace also expands underground into the cool sandstone arches of the servant’s quarters, now overtaken by modern art dripping from the walls. And I mean literally dripping, there’s some sort of melted art going on. But this is where Dany kept her poor dragons locked up, and they were not very happy about it. I’ll say, given the amount of souvenir shops also down here. The Game of Thrones filming paved the way for more archaeological works underground, by clearing out some of these tunnels.

While Diocletian’s Palace was used for some locations in the show, half an hour outside of Split is the Fortress of Klis (aka Mereen). There’s no winged woman atop the fortress, but the diagonal staircases are immediately recognisable from the legions of unsullied who stalked the walls. These are the steps where Dany was guarded by the Unsullied. It’s all rather exciting. Who doesn’t want a photo of the steps where Dany stood?

But the view from the top is worth the drive. As I look beyond the old fortress, towards Split and the ocean, I can’t stop humming the familiar theme of that TV show over and over again. It’s hard not to feel like the most powerful woman in Westeros when you’re standing in a mountain fortress that has seen the Dalmatians, Croatians and Ottoman Empire fight at its borders.

Back in town, I buy my official, authentic Khaleesi ring made of local limestone and silver from a local souvenir shop. It’s apparently the last one. Sure, sure I think, not knowing the stones will fall off back home.

At least in Croatia you can embrace your fandom like an utter, unembarrassed geek. No shame.

Hiking the You Yangs Regional Park

How to save money for a world trip

Why You Should Always Ask Permission for a Travel Portrait