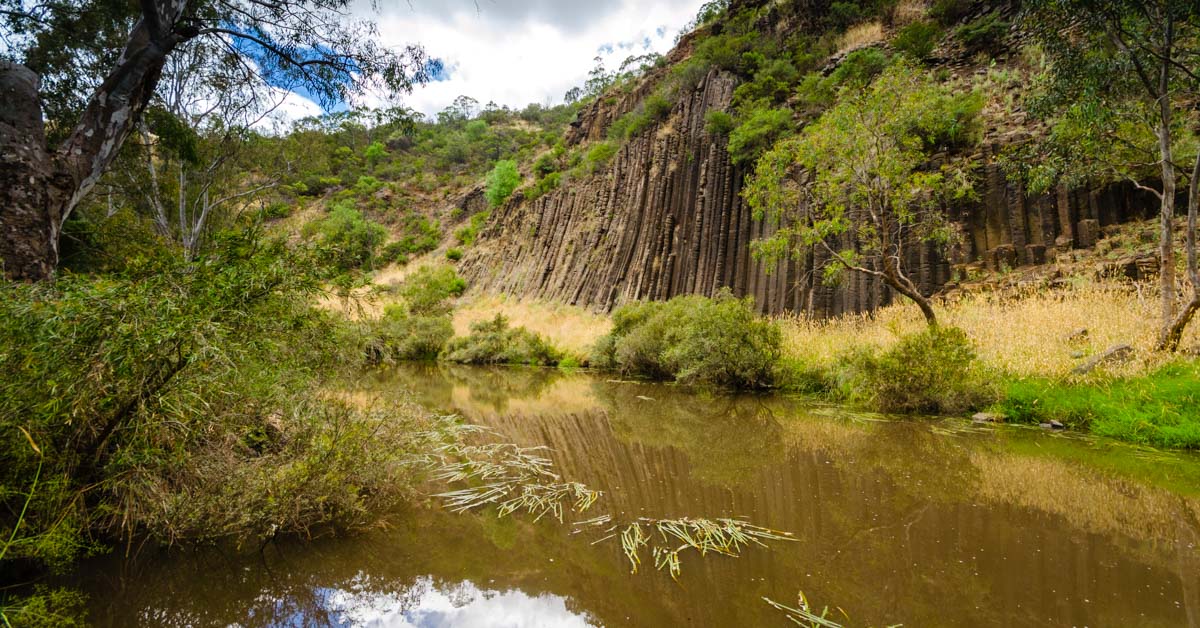 It’s been a tough couple of weeks for me, and I always know that when everything feels overwhelming the best thing for me is to get back into nature. I’d been meaning to visit Organ Pipes National Park for ages – it’s only a half-hour drive from my house, and it’s got one of the few examples of these special basalt stone structures in Australia, formed from volcanic lava which has shrunk and cracked over millions of years.

Organ Pipes National Park is only a short drive from Melbourne on the Calder Freeway. The entrance comes up quickly on the freeway, and it’s a little tricky getting across traffic turning right.

The park itself is only fairly small; it’s a 3.5km round trip to see all the features of the national park. The trail goes down a steep drive to the creek and a picnic area. Follow the trail and you’ll find the Organ Pipes, a 10 million year old rock formation.

I’m always in awe when I come face to face with such old rock formations (sure, we’re standing on the Earth which is pretty old), but these natural wonders really hit home for me. I wanted to get some photos with the reflection of the rock face in the water, although I didn’t bring my big tripod it was fun wrangling the gorillapod on the creekside. I used a graduated ND filter to combat the glare of the clouds.

After marvelling at the Organ Pipes, I continued down the trail to the Rosette Rock, stopping by Jackson Creek to take some long exposures and impressionist photography of the river weeds floating along. I feel like there’s something very calming about these images.

The Rosette Rock looks more like an explosion hanging over the creek, caught in mid air. Quite spectacular.

I followed the trail to the Tessellated Pavement, where the creek has revealed the hexagonal structures which extend a fair distance to the rock walls. I wonder what it would look like if it continued to be worn down.

While it’s only a small park, it’s a nice place to bring family and come for lunch. There are picnic facilities under the trees. Although they might not appreciate the steep walk back up the hill!

You can find out more about the Organ Pipes National Park on the Parks Victoria site.