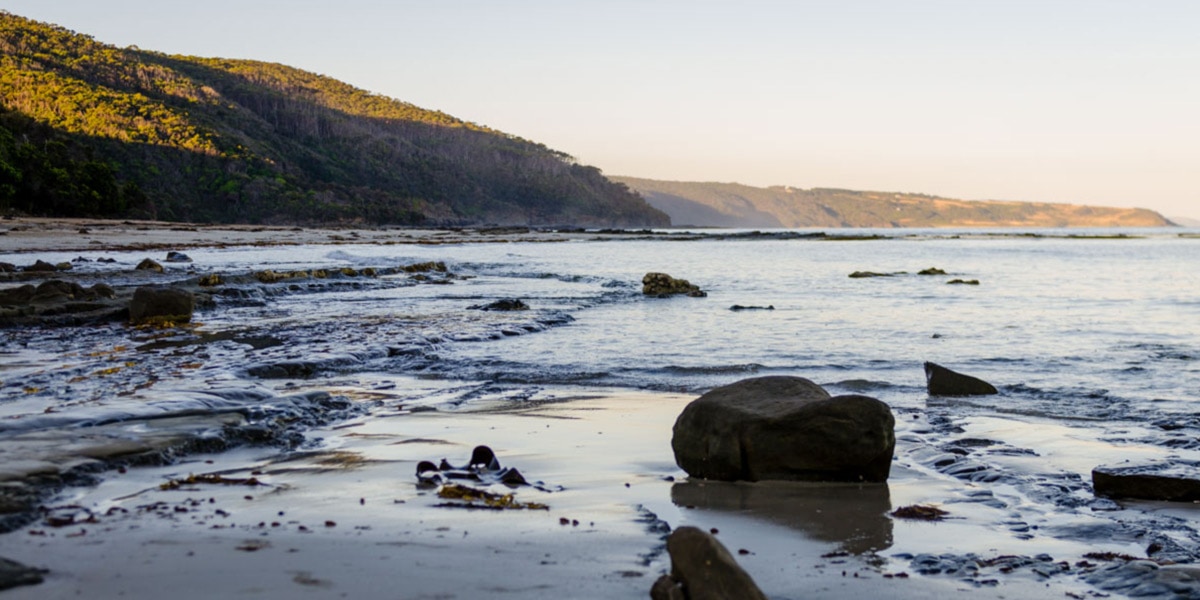 Hiking the Great Ocean Walk – What You Need to Know

The Great Ocean Walk runs along the southern coast of Victoria, Australia. Despite a couple of steep sections, the short days and well-marked trail make it a scenic and relaxed hike, suitable for hikers getting their first taste of long distance walks. You’ll pass through the green forests of the Otways to the rugged coast, past some of Australia’s most well-known landmarks.

Despite being a popular hike, I found it pretty hard to get straightforward information about the campsites, transport, the order of the hike and where to book on a single web page. So I’ll outline it here.

There is a more detailed explanation of the hike here. I hiked days one to three, but the logistics are similar for long-distance hikers. I’m keen to go back and do the rest!

I had a lot of difficulty booking campsites on the new site, so I used the old booking system which is a lot clearer. You MUST book a campsite in advance and carry your permit with you. Unlike other national parks in Victoria, you don’t buy a tent permit per person. The price is how much per tent. For example, we had two people in one tent, so we bought one permit.

I also recommend picking up a copy of the Great Ocean Walk official map which outlines the hike, key points and route. Although I have to say the map is not made of very durable material, mine is falling apart after three days in a map case. I got one from Bogong in Melbourne for $20.

If you’re a fit person you could definitely do the hike in less days; most of the days are between 10-13kms, which can be done over a couple of hours in the morning. But it’s worth taking time at some of the campsites like Blanket Bay, where you can go swimming and watch the sunrise over the beach.

You can get to the Great Ocean Walk from Melbourne by public transport, which makes it a very affordable trip. Plus, it’s a beautiful bus ride along the Great Ocean Road. As of Jan 2017, it was approximately $60 for a return ticket from Melbourne to the start of the hike in Apollo Bay. You first take the V-Line train to Geelong, then hop on a bus to Apollo Bay. On some days the bus runs all the way to the Twelve Apostles, so if you’re doing the whole hike, you can catch public transport on both legs of the journey. We left Melbourne in the morning and arrived at 1pm, got some lunch at Apollo Bay and headed off, making it to the campsite by 5pm.

As we were only doing three days of the hike, I arranged a transfer with Walk 91 for $60 for two people from the Cape Otway Lightstation back to Apollo Bay (Dec 2016 prices). They turned up right on time with a friendly driver who chatted to us the whole way back. We then caught the 3:15pm bus back to Geelong and were home having nice showers by 8pm.

What you can expect on the hike – the first three days 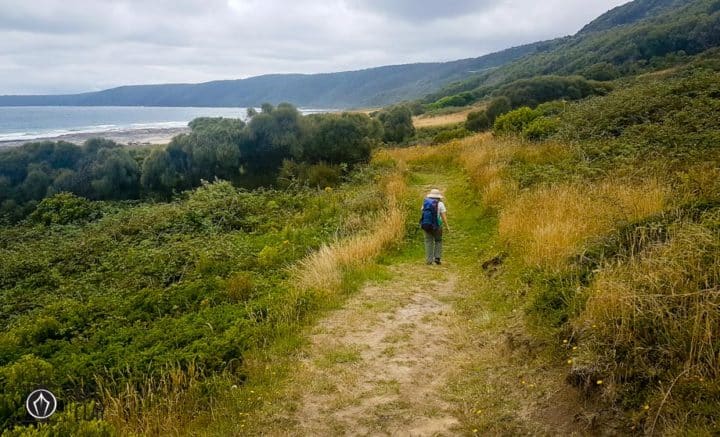 From Apollo Bay, it’s a reasonably flat four kilometres along main roads to the start of the bushwalking. Once at the coast, the trail held a couple of steep hills to challenge my fitness; it’s possible to walk along the beach at low tide, but that’s sometimes more difficult than walking along a firm trail. At the top of the hill, I watched the coastline descend into fields of long grass swaying in the wind and rugged cliffs dotted with dandelions. The hike crosses the creek, to ascend to Elliot Ridge campsite in a seemingly never-ending hill. The campsite was surrounded with tall gums, with seating, toilets and shelters for common use.

From Elliot Ridge, the hike meandered along the Otway service trails, so the landscape was fairly similar for most of the hike: towering stringybark gums, green ferns, leaf litter under foot. But Blanket Bay felt like the reward at the end of a long hike. A beach with ice cold water straight from Antarctica. I went for a swim, dunking myself to sooth sore feet and hopefully get rid of some of the stink from hiking two days straight. Small white fish skidded between eruptions of sand caught on the inhale and exhale of the sea. My tent hid in a gathering of trees, only a short walk from the sea.

I got up very early to take photos of the sunrise; colours of pink, purple and blue reflected in the rockpools of Blanket Bay. After packing up, I hiked through the campsite and found the path, only when I realised the signage was hidden by people sitting in front of it. Early in the morning wildlife populated the track; a wallaby hopped past me and a Major Mitchell cockatoo screeched overhead. The hike followed the coast, up and down, especially steep after the Parker Inlet River crossing. I stopped at the Cape Otway Lighthouse, although the third night campsite was not much further.

I loved hiking the Great Ocean Walk. It was fantastic to disconnect from technology and reconnect with nature. I’m looking forward to my next long distance hike in April: the Overland Track.

Have you done the Great Ocean Walk? I’d love to hear your experience. Feel free to ask a question in the comments below.

Thanks for the detailed info. I was curious how far in advance campsites you think need to be booked. Going in Dec 2018. Appreciate any feedback and enjoy your weekend.

Hey Dustin thanks for getting in touch. It really depends on when you’re going as to how far in advance you should book. I’d say once you confirm dates book asap as December’s peak season. However there’s been times I’ve gone to popular sites and only booked a couple of weeks in advance. It depends on how flexible your hiking dates are. Good luck and I hope you have an amazing time 🙂

One week in Paris Itinerary