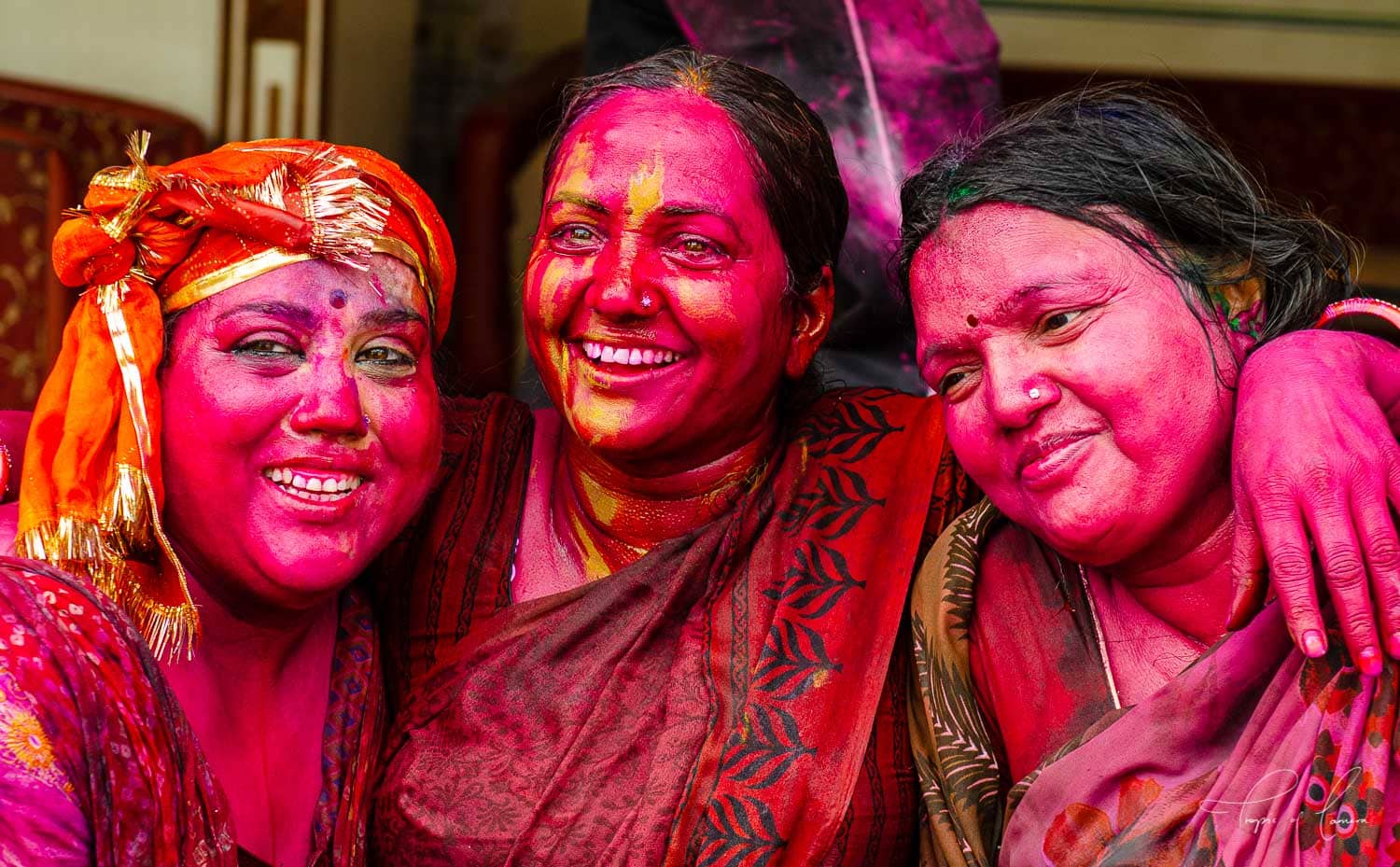 The Holi festival is one of the most visibly beautiful festivals to photograph for any travel photographer. Holi, otherwise known as the festival of colour, is celebrated in March or April every year. One of my main reasons for visiting India at this time of year was to photograph the festival, with the aim of getting some very colourful portraits.

The day was a success but it was really important to me to do my research beforehand. Safety is one of my primary concerns whenever photographing a festival, that was why I booked a hotel in Jaipur, as they promised to do their own Holi celebration within the courtyard of the hotel.

There were a few reasons why this was beneficial:

Protecting your camera at Holi

With this in mind I needed to prepare my camera for Holi. Now you could take your expensive underwater housing and use that, but a plastic bag works just as well. Pick your fastest lens – I used a 24-70 f/2.8 – and DON’T change it unless you want to be cleaning purple powder off your sensor. Make sure your lens hood is attached as it can provide extra protection from the powder getting into your lens.

I set the camera on automatic, as there was no way to be changing the settings without taking it out of the bag. I cut a hole in the bottom of a plastic bag and duct taped it to the lens hood. I then folded the handles of the bag over the viewfinder and taped it up. You could see through the viewfinder, but nothing was going to get into the camera. Excuse the mildly horrific quality of this photo, but my camera was in the bag!

The only time I had problems with this set up was when someone completely dumped purple on me, but thanks to the bag there was very little on the camera that couldn’t come off with baby wipes and a brush. The strap was another matter, but most of the powder came off with baby wipes.

When photographing the festival, I wanted to get several good portraits. But don’t forget to shoot the details – often the smallest things are the most beautiful, like this shock of red powder in a blue hand.

After playing Holi all morning, we decided to venture out into the streets as a group at around 2pm. The Holi celebrations were wrapping up outside, but there were still a few people who wanted to douse us in colour. Thankfully, when we turned our faces or walked away, they didn’t do it. It was still intense being on the street, so we hired an auto-rickshaw to drive around and take pictures of people post-Holi. It was a great idea, because if anything got too rowdy we could just zip off, but nothing like that happened. Everyone was in a good mood and driving home to their families, so I sat on the back of the auto-rickshaw and waved to people who were more than willing to get their photos taken. A much less intimidating way of photographing Holi.

My top tips for shooting the Holi Festival

I found both Jim Shannon’s guide to Holi photography and Shooting the World by Tony Burns to have very useful advice for shooting Holi, as well as some inspiring photography.

Best Photos i have ever seen. Appreciated Man. Keep it up.

Hi Martin, These photos were taken in Jaipur. Great city to visit if you’re interested in photography. Cheers, Kat

[…] competitions, simply for their incredible mix of colour and people. If you do go, check out my Holi Photography Guide […]

The Top 15 Travel Accessories for Backpackers