Why You Should Always Ask Permission for a Travel Portrait

On a recent trek to Mount Everest Base Camp, I met a couple of budding photographers. While walking with one such photographer he pulled out his camera and started snapping surreptitiously at a local woman. I told him immediately to stop spy camming her. “You should always ask someone’s permission for their photograph,” I said. He shrugged and walked off. It annoyed me that he didn’t care about her, and it annoyed me more that he seemed nonplussed about my advice.

It’s not like the woman couldn’t see what he was doing. He hadn’t wrapped his camera in newspaper or worn it in a brooch. It was a mighty big camera, with a big lens and a bloody big Canon strap on it. She looked annoyed too, but she’d probably seen it before.

Lately I’ve become increasingly annoyed with people who don’t ask permission for portraits. And then I read Lola Akimade Akerstrom’s post on the TBEX site “Want to be a better travel photographer? Stop sneaking shots” which put into words a lot of the issues I’ve been thinking about lately.

Spy camming someone instead of asking for permission is treating someone like a novelty, an object and not the person that they are. How would you like it if someone just started taking photos of you in the street? You’d put your hand up or your finger… Asking for permission immediately engages the subject with the photographer. It also avoids being chased down the street by angry people, or worse, being sued or arrested.

You know what? I used to spy cam people too. And guess what? Photos taken without permission are crap. They’re rubbish. See this spy cammed photo below. No wonder it’s terrible… I didn’t look through the viewfinder and it’s out of focus, wrong angle trash. 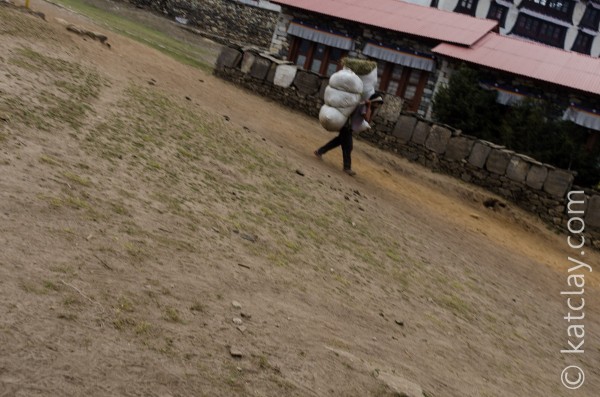 Or wow, this monk’s back. Sooooo not interesting. Backs are only interesting if they’re kimonos. Or tattooed. Or have giant wings on them.

The only time it’s okay to take people’s picture without permission is events, especially events when people are dressing up in costumes, getting on stage, doing stuff to get your attention. My opinion is that they’re fair game. They know what they’re signing up for when they join the performing artist category.

I’m not against street photography or photojournalism. When you’re taking photos in an environment you don’t always want to notify someone you’re there, but it’s a different ball game to taking someone’s picture individually against a backdrop. The best choice I ever made for my photography was to start asking permission to take people’s photograph. Despite my shy personality. Despite my fear of being rejected. Despite any hang ups I may have had, I made a resolution that I wanted to take better travel portraits. Asking for permission is key to that. Check out this amazing kid below, who I reckon would give Bruce Springsteen a run for his money as “The Boss”. Taken 100% with permission.

As for the sneaky photographer in this story… I got my revenge by taking some snaps of him slumped over sleeping in an unflattering position. But ’cause I’m not a jerk I won’t post them here!

How to use leading lines in your photography

How to Make Money as a Travel Photographer